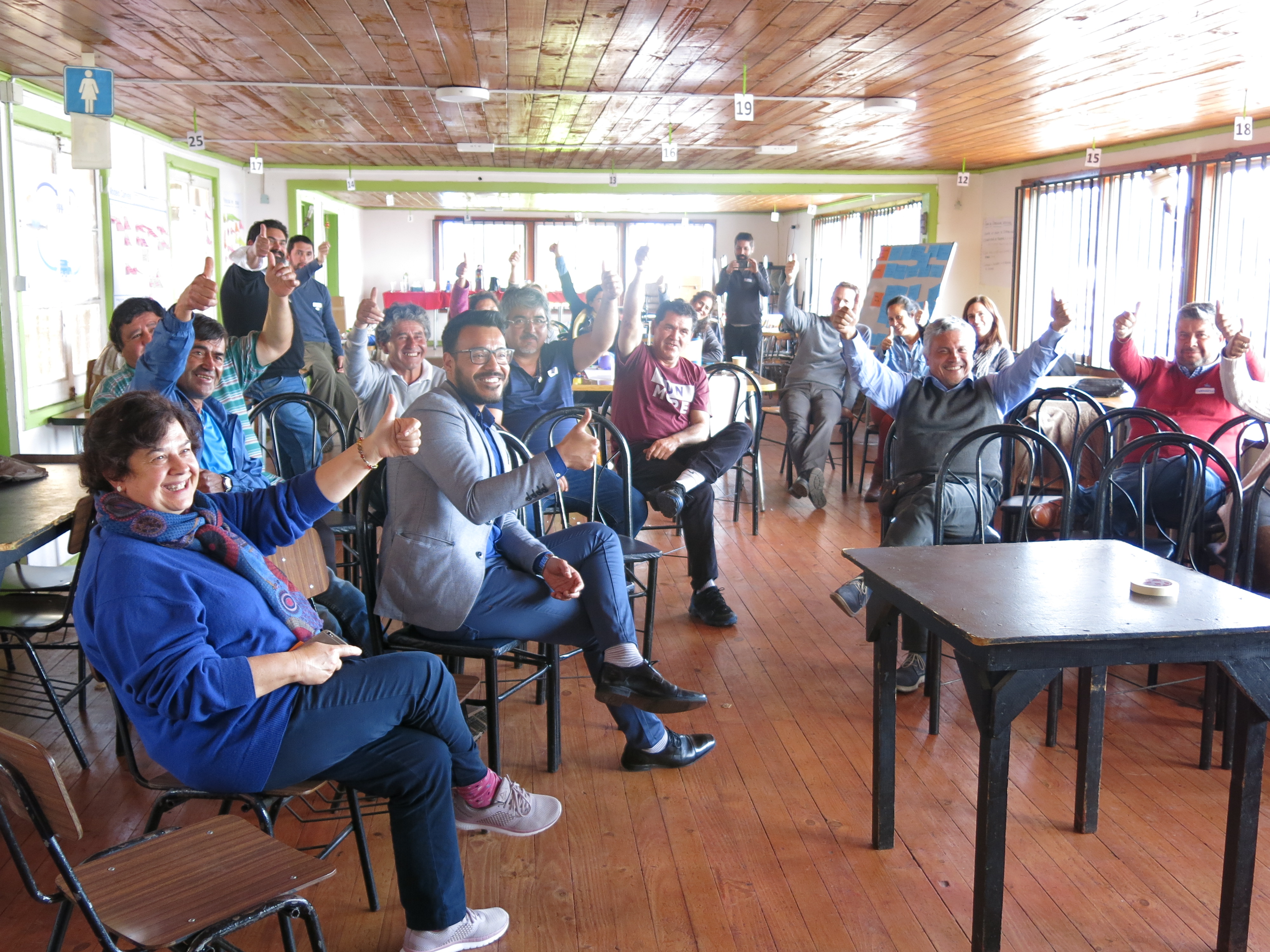 By Marah Hardt, Research Director
The problem of overfishing and declining resources in the ocean is very serious—that is why introducing a little bit of play can be critical to designing effective solutions.
Over the past two weeks, we’ve had the privilege of working with three different fisher caletas along Chile’s central coast to ideate solutions to the declining hake fishery and the poor pricing that threatens the livelihoods of these fishers and their communities. This was the third workshop in a series of four that we are conducting in partnership with ECOS, to design interventions that we hope can directly benefit specific fishing groups, as well as provide tangible and concrete examples that can inform the path towards transforming the entire artisanal hake fishery to a more sustainable state. And it’s the first where we’ve introduced play as a way to problem-solve.
In the two previous rounds of meetings, we focused on getting to know these communities, and listening deeply to their specific concerns and ideas for progress. For this third round, the focus turned from the stuck points to building out the ideas for creating change in a true co-design format.
One of the biggest challenges to identifying effective solutions within the complex fisheries system is a tension we see repeatedly: those working within the fishery and supply chain have the greatest insights into what and how to solve for change; however, being so ingrained in the issues, they often fail to see the forest for the trees, and their specific expertise and experience provides an avoidably limited perspective.  Put the same people in the room together, trying to solve the same problems, and often, you wind up with the same set of ideas that often just don’t work.
To help resolve this, Future of Fish has been working to incorporate principles from the design world to generate out-of-the-box thinking and broaden the suite of potential solutions that are generated in the world of fish.  Two ways we do this are to introduce elements of play and “creative agitation.”
We introduce physical prototyping—using basic arts and crafts materials such as play-doh, pipe cleaners, and construction paper— because the act of making something with your hands taps into different parts of the brain than talking or writing—and thus, can help us come up with new ideas.

The process also forces participants to literally build off one another’s ideas, creating a sense of collaboration and teamwork. And, because most of us are not Michaelangelo, we have to explain what it is we just molded out of clay and stuck onto the prototype—we have to move from abstract to concrete ideas and articulate those ideas clearly and succinctly.

And, for the vast majority of us, the act of creating together is inherently fun.

Second, we introduce “creative agitators,” individuals with expertise from outside the system, who can ask questions and offer suggestions from a perspective beyond the specific fishery. In the case of these workshops, we aimed high and invited individuals from the tourism industry, as well as the media, social entrepreneurship, and innovation sectors amongst others. We also brought together two ends of the supply chain that had rarely engaged faced-to-face before: fishers and Open Air market vendors.
Our partners, ECOS, incorporated these two components of our methodology into their facilitation, adding their own expertise to the mix. The result was a co-created event that guided fishers, vendors, government officials and creative agitators through a series of activities that ultimately led to some clearly-identified strategies, and a whole lot of enthusiasm.

First, after a round of introductions of people in the room, ECOS led multiple teams to map the important components of the artisanal hake system beyond the supply chain—sea lions and industrial fishers were both prominent characters in many of the maps.  Comparing the different maps helped everyone get on the same page and fostered empathy for the barriers faced by different actors in the system.

The “blue sky” method of prototypes is grounded in the insights surfaced by ideas generated by the caletas in the previous workshop and over 18 months of research and engagement on the ground. Specific questions regarding how the solutions would work, what resources would be needed, and other factors were then captured on a basic version of a Business Model Canvas.

Though we are often met with strange looks when we bring out the supplies, it only takes a few minutes for folks to dive in and rediscover their inner artist. Play comes naturally to us all, and research shows that it helps with innovative thinking, problem-solving, collaboration, and empathy.
At the end of the day, we were humbled by the breadth of ideas, the passion, and the collaboration that occured in each of the workshops.  During the closing session, we heard fishers noting that they often feel abandoned in their desperation from low prices and resource depletion, and, suddenly being surrounded with such a diverse group gives them hope; one vendor noted how she had no idea regarding the hardships the fishers faced, and saw clearly how partnership could benefit both of their businesses; and we heard from government officials that it was the first time they saw such an atmosphere being hosted at a fishers caleta.
We are more inspired and motivated than ever to now continue the work to turn these concepts into workable, and in some cases, investable, scalable solutions.  The next workshop will require the difficult task of putting these ideas through reality checks, refining where needed, and looking to connect caleta-specific solutions with larger system interventions to ensure we are strategically and effectively moving the system forward. We want these ideas and the potential pilots that emerge to go beyond the typical pilot approach. Instead, we want ownership to exist by the stakeholders, robust business potentials to be explored and supported, and each project not to be an isolated activity but to be a component of an integrated vision for the improvement of the wider system for the long term. Our goal remains to secure long-term fisheries transformation for hake that can support livelihoods, food security, and ecosystem health.  With the help from a little play, we are on our way.