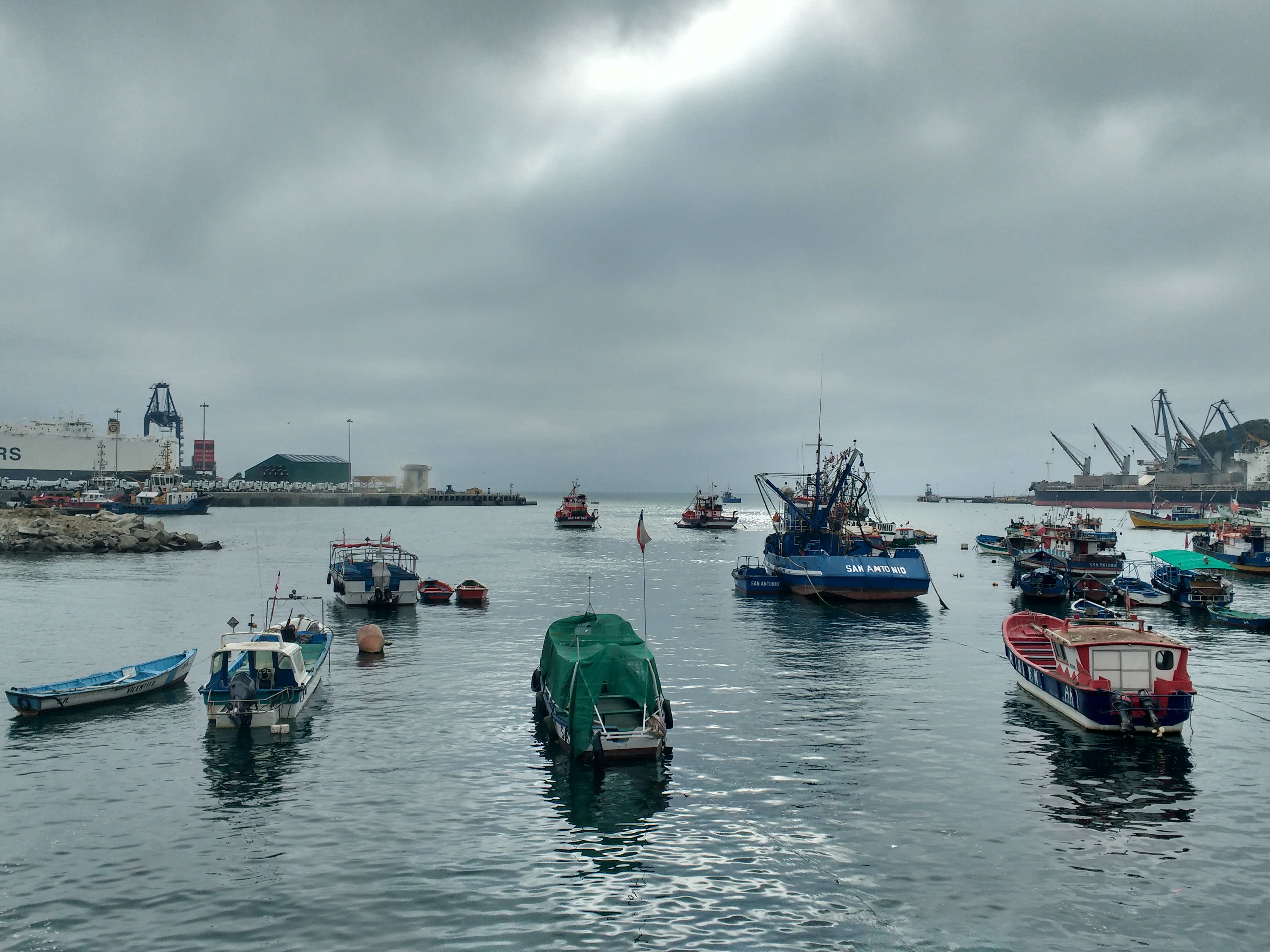 We’ve been writing about our novel co-design process with the Chilean caletas (fishing coves) involved in the design and demonstration phase of the Fisheries Development Model in our previous blogs. We are proud to be collaborating with these fishing communities, and wanted to take the time to introduce them here. We have already begun to work with three of the caletas and associated actors to co-design innovations for the common hake fishery: El Quisco and Jaiberos de San Antonio, in the Valparaíso region and Duao, in the Maule Region. The caleta of San Pedro de Concón, also in the Valparaíso region, is the fourth community where we will be holding a series of collaborative co-design workshops.

This caleta is located within a beautiful bay. Less than an hour drive south of the City of Valparaíso, and as in other places in this region, its Mediterranean climate makes its winters not so cruel nor the summers crippling. Renowned for being a place of rest and inspiration for people linked to art and culture (including Pablo Neruda!), El Quisco is a beautiful summer resort for Chilean families just one hour away from Santiago. Due to this good location, the local economy presents itself as dynamic and robust—just by observing the infrastructure of the town, you can see that the summers here are high activity.
The El Quisco caleta has more than 20 boats registered for the extraction of common hake. Annual fishing volumes average 100 tons per year. Other resources extracted are Jaiba (crab), Black and Red Congrio. These fishers utilize a very interesting and traditional "triple-mesh" (“tres telas”) net for the fishing of Congrio. It is a completely handmade technique, with a selective mesh size, of which the local fishers are proud.
Indeed, this caleta has everything necessary to be a cultural and tourist attraction. There is a deep history and sense of heritage with the local artisanal fishery. Despite not having an overtly large fleet, the caleta has a small pier, two restaurants, a small fish market stall with products from other parts of Chile, and direct points of sale for the public for local resources. Furthermore, there are kayak boats and a beautiful beach that can be accessed from the port’s perimeter. Luckily, the sun has always been on our heads during our visits.

The Leader of the Syndicate (STI El Quisco), Francisco, is very enthusiastic. At the beginning he was the spokesperson for 75 members, half of whom were very engaged. There are many ideas going around in his head, but it is interesting and honorable how he wants to involve all the members in the upcoming discussions. Undoubtedly, this caleta has many attributes for a sustained collaboration with our teams in the coming months.

The Sindicato de Jaiberos de San Antonio  (San Antonio crab syndicate) seems to be raising its hand, asking for permission to be visible. It is located within an urban conglomerate of approximately 100,000 inhabitants (San Antonio), which makes the dynamics of the caleta very different from those located in smaller towns. It is no coincidence that the syndicate (one out of 7 others in San Antonio) has only a small office among the infrastructure that surrounds it. This infrastructure includes a shopping mall that acts as a wall (and that gives a lot of shade to the beach!) and a massive shipping port terminal—the most important in commercial terms throughout Chile. San Antonio is located 115 km from Santiago and bases its economy precisely on the activities of the port, which has relegated artisanal fishing activity in recent years, raising local social conflicts.
The group fights to keep the tradition of the Chilean Artisanal fishers alive, regardless of socio-territorial conflicts coming from the upgrading of the  port infrastructure in the last decades. It will be a beautiful challenge to work with them.

Duao is a place with one of the best sunsets the Future of Fish team has witnessed throughout our adventures in Chile. Similar to El Quisco, Duao is known as a resort destination for both people from Chile and visitors from abroad. Furthermore, the ideal conditions for surfing attracts young people who travel along the South American Pacific coastline. That is why within the town you see a surprising amount of cabins, diverse lodgings and gastronomic alternatives. Indeed, the locals and hosts’ kindness is as warm as the fire needed in Duao to heat your body during the winter seasons. It’s a chilly place as the Pacific rolls in during the winter months! The distribution of the town seems to organically imitate the coastal line: it is a few kilometers long but it is only a couple of blocks distance from the sea up to the beautiful hill that seems to be watching the town from the East (Cerro Duao). Some cabins lie on the Cerro’s slope. It is by contemplating the beautiful postcard view from up there that one realizes how vast the Pacific Ocean is.
Duao and its people are strong. Like all the neighboring towns within this zone, it was hit very hard by the earthquake and subsequent Tsunami of 2010. You can tell that a lot of the existing local infrastructure was rebuilt post tragedy. Our partners from ECOS participated in the assistance and some survey tasks in the aftermath of the tsunami. Our work with this community is thus steeped in undercurrents of empathy and recognition for the suffering and courage of the local fishing community.
Strength is also present in Claudio, leader of one of the two local syndicates: Sindicato de pescadores "Mar brava" (“rough waters” fishers syndicate). The size of the syndicate is considerable, with approximately 90 boats with powerful engines that can break through big waves and more than 100 members. The syndicate extracts one of the largest volumes of the national artisanal hake quota: more than a thousand tons per year, according to official records. Without much possibility of diversification other than crab or giant squid, a few members opened the doors for our teams. It is simple, for them harvesting a lot of hake is not necessarily synonymous to access of a decent livelihood. The conversations with this group were, from the beginning, very passionate. It is a pleasure to share these exchanges in the social building of the syndicate, that lives a few meters away from the sea. It is from there you can see the fleet of the local fishers, that lie on the open beach a couple of km north. Unfortunately, the new infrastructure the syndicate received from the government to help land their catch is now 100% obsolete due to changes in climate and the consequent modification of the topography of the beach and landing areas.
It is gratifying to see that, within the group commanded by Claudio, there are young fishers full of enthusiasm and ideas. As we will let you know in an upcoming post, the scale of the caleta creates complexity in local issues. Despite (or precisely because of) this complexity, the community has been identified as a great place to hold a collaborative based co-design approach.

San Pedro is another caleta that carries out its activities within the context of a constant influx of tourism. The small cove is on the coastal route that links Viña del Mar with resorts further north such as Reñaca, Maitencillo, Zapallar and Papudo. It is beautiful to observe the caleta from the second floor of the syndicate's restaurant, right in front of the street and next to its small processing plant.

This small caleta has just over 25 members. They are very respectful of the decisions made in a group. This has meant that obtaining consensus for our team to work with this community has required lengthier deliberations. Its 8 merluza boats are moved into and removed from the water by a crane on a daily basis. These boats are responsible for the extraction of approximately 80 tons of resources annually, in addition to giant squid, Jaiba (crab) and, in the near future, some benthic resources that will come from their recently monitored and electronically surveyed TURF for benthics. This cove is located at sea level, and from the path down to the cove that is elevated by a few meters, one can think as if the caleta was immersed inside a big hole. This gives a special and particular beauty to these fisher’s working space, which, thanks to the initiative of its leader, Julieta, has been decorated by a community mural that shows the artisanal activity and the ocean resources found in the area.

When we toured the coves at the beginning of 2018, we marveled at the unique strength of Julieta and at all the projects started or to be started in the near future (see blog post). She has as many ideas as she has strength in her arms: Julieta is a open water swimmer, with recognized international fame. She has swam across the Strait of Magellan and the English channel! We definitely want to work together with her inspiring and creative spirit, hopefully that will happen soon!

These are the wonderful spaces that, more and more often, we are visiting with our teams!
Soon we will have more details about the work of co-designing place-based innovations with these unique communities. We hope you’ll continue reading about our work in Chile. Until next time!