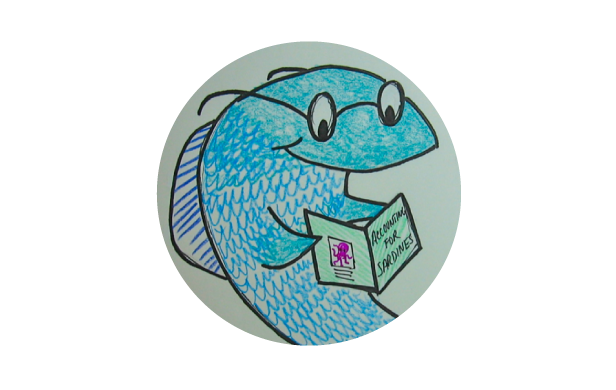 Journalist Rob Walker and semiotics analyst Joshua Glenn undertook a fascinating experiment recently to see whether story changes the value of an object. They collected an assortment of 100 yard sale oddities, purchased for an average of $1.25 each, and then asked notable writers to invent fictional histories for the items. Even though the descriptions were clearly labeled as fiction, the storied objects collectively sold for nearly $8,000 on ebay.

As human beings, we are wired for connection, and hence, we’re wired for story. Story creates emotional attachment to things, to people, to events in our lives. So it’s no surprise that a story is something we’re willing to pay for, or that our willingness to pay can be a vehicle for profound environmental and social change: Fair Trade coffee, cage-free eggs, grass-fed beef. These labels are shorthand for stories about making the world a better, fairer and more compassionate place.

But we’re not good at telling the story of fish. Most of the time, we eat mystery fish: It’s white, breaded and tastes good. Who cares what it is and where it came from? When we do have information on a fish’s story, that information is often false. Between 25 and 70 percent of all fish sold in North America is mislabeled—wrong species or wrong country of origin. Why is that true?

Well, we spend a lot of time at Future of Fish trying to understand behaviors in the supply chain. From our observations, the issue is this: The seafood industry runs with small margins and high inventory losses. About 20 percent of all fish goes bad (in developed nations) before it reaches a consumer. To cope with that financial crunch, some supply chain players choose to pass off a cheap fish as an expensive one; or just substitute unpurchased fish for the in-demand species that didn’t come in on that day’s boat. The industry has become dependent on fraud to survive.

Unfortunately, to preserve its old way of staying in business, the industry ruins the opportunity to profit from the value of story. Bar codes and auditable traceability technology would help the supply chain carry better stories; but those tools also preclude the kind of wide-scale fraud to which the industry is addicted.

We’re out to prove with our entrepreneurs that Fish + Story brings better margins and a reinvented supply chain. Best of all, Fish + Story also demands a more responsible fishing industry. Because once a consumer understands that one pound of shrimp creates nine pounds of bycatch, that meal is a whole lot less appealing. Would you rather buy a story starring a local fisherman who fishes sustainably or one starring a giant commercial trawler run by slave laborers?

What does it take to create a marketplace for fish that is rich with story and where story garners better price? Well, first it takes the technological capacity to carry that story. That’s why we’re working with companies who’ve built better supply chain data technology for the seafood industry, and with entrepreneurs who’ve invented better data capture systems at the boat level to elicit story from the fishermen. We also work with entrepreneurs who are writing many new possible future stories for fish. What if one day you could get prescription farmed fish, fed a diet of specific algae rich in the nutrients you needed to prevent or even treat heart disease? What if buying a share in a community supported fishery also helped create a loan fund for the fishers to buy less polluting boat engines? Those stories are not as far away as you might think.

We know people are willing to pay more for certain kinds of story. Anyone who tells you people won’t pay for Fish + Story is basing that conclusion on what we like to politely refer to as “bullfish.” There’s simply not enough accurately labeled fish in the marketplace to conclude that that’s true. Fifteen years ago, many argued that no one would pay extra for coffee that delivered a guaranteed price to farmers. But now, Fair Trade coffee is everywhere, even places that don’t cater to well-off, neo-liberal customers, who are supposedly the only ones who care about this stuff.

We do know that if we don’t create a value-added market for Fish + Story, then we relegate one of our world’s most precious and dwindling resources to being priced as a commodity, which reinforces the cycle of bad industry behavior and chokes the livelihood of fishing communities with unfair prices.

I think there’s an excellent chance for Fish + Story to win. I think there’s nascent proof in the work of our cohort members. Ultimately, I have to believe that if story can create margin for a goofy ceramic poodle sold on ebay, then by god there's hope for fish.