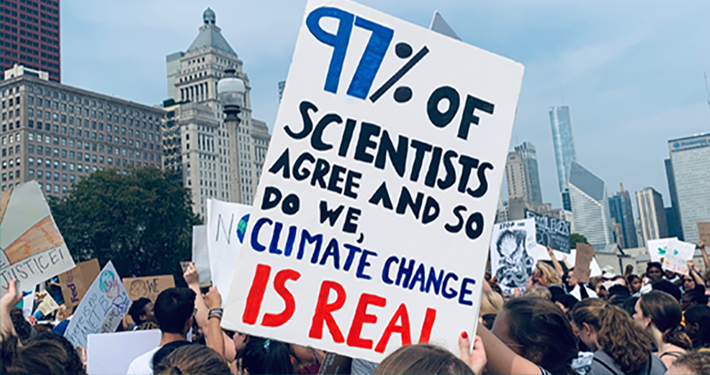 In our last blog post, we looked at five ways that climate change threatens fish and the people that rely on them for their livelihoods. Since then, the IPCC released its Special Report on the Ocean and Cryosphere in a Changing Climate, which paints an alarming picture for our ocean.

We admit to shedding a few angry tears as we read the report. But the flipside is that it’s not too late to make systemic, meaningful change to limit greenhouse gas emissions and contain the negative impacts of climate change. In fact, given the gravity of the situation, systemic approaches are more needed than ever to tackle this challenge. As inspiration to help us get back to work, this week we look at innovations and initiatives that mitigate and reduce climate impacts to oceans, fisheries, and coastal communities. Do you know of other projects that are tackling this challenge? Want to get more involved? Drop us a line.

Scientists play a vital role in helping to understand the impacts of climate change on coastal communities—many are also helping design the solutions.

Marine biologist Dr. Ayana Elizabeth Johnson co-founded Urban Ocean Lab to develop climate solutions for coastal cities. She notes that “it’s still really important to think about how are we going to manage this [climate] transition for people who live in what are going to become increasingly dangerous places. A third of Americans live in coastal cities, and we are not prepared for what’s coming.” Another leading voice is Associate Professor Malin Pinsky, who runs the Pinsky Lab at Rutgers University. The Lab focuses on advancing global understanding of marine populations and communities in a rapidly changing environment. Its recent research includes understanding how climate change will likely affect the fishing opportunities for 85 communities in New England and the Mid-Atlantic.

A report from the High-level panel for a Sustainable Ocean Economy includes a focus on ocean-based transport as a potential way to help reduce global emissions. It notes that “Shipping is a significant source of emissions with identifiable reduction pathways, but it is also an enabler of world trade and economic development”.

Pacific Nations are particularly reliant on shipping, with 80-90% of all goods in countries like the Marshall Islands and the Solomon Islands arriving by sea. In late September, the governments of Fiji, Samoa, the Marshall Islands, Tuvalu and the Solomon Islands announced the Pacific Blue Shipping Partnership, which has a target of 40% reduction in emissions by 2030 and full decarbonisation of the shipping sector by 2050. The Partnership plans to raise the ~$500 million needed to transition to sustainable, resilient, and decarbonised sea transport.

Seaweed is pretty awesome. To grow it, you don’t need any of the fertilizer or freshwater that land-based plants and animals require, and it absorbs five times as much carbon as land-based crops. In his book “Eat Like a Fish”, fisher-turned-seaweed farmer Bren Smith further extols the benefits of growing seaweed, noting “they simply grow by soaking up ocean nutrients, making it, hands down, the most sustainable form of food production on the planet.”

At Future of Fish, we're working with The Nature Conservancy in Belize to help communities build a seaweed industry which is sustainable from day one. This includes ensuring there’s funding available to lend to fishers who want to transition from fishing to seaweed farming, and working to set up a supply chain with buyers for the product. Other organisations supporting seaweed initiatives include Blue Ventures, which has worked with villagers in Antanimanimbo, Madagascar, to help them become seaweed farmers, adding an important new source of income.

In February, we wrote a blog post about five things to watch in the world of fish. One of them was blue carbon. Eight months on, we’re still convinced that blue carbon ecosystems—including mangroves, sea grasses and tidal marshes—have the potential to make a profound difference when it comes to mitigating the effects of climate change. Such coastal habitats not only prevent erosion and provide valuable environments for fish nurseries, they also absorb and store vast amounts of carbon. Protecting these ecosystems thus can be a win-win, helping boost fisheries and reducing the amount of CO2 in the atmosphere.

The challenge is how to protect and restore these threatened coastal ecosystems at scale. One pathway for mangrove restoration is through carbon offsets, known as blue carbon financing. With blue carbon financing, projects that keep mangrove forests intact or restore damaged forests can be purchased and traded on the global market to compensate for carbon emissions made elsewhere. The Blue Carbon Initiative is convening scientific and policy working groups to sort out the details of how offset projects can qualify and how much carbon sequestration they can claim.

Blue carbon ecosystems highlight the importance that nature has to play in the fight against climate change, in addition to sharply reducing carbon emissions.

Last month, Greta Thunberg and George Monbiot released this video with the Guardian, highlighting the importance of nature as a climate solution. Along with forests and other terrestrial trees, essential—and currently underfunded—natural habitats that absorb carbon emissions include coral reefs, mangroves, coastal wetlands and kelp forests. Today, only 2% of funding for climate change solutions is spent on implementing these natural carbon solutions.These are fixes that help battle climate change while also restoring biodiversity, improving food security, and increasing water quality.
Powerful solutions to complex problems sometimes can be as simple as planting trees. As they share in the video, we need to protect, restore, and fund.

For more information on other actions that need doing, see the IPCC report and the report from the High-level Panel for a Sustainable Ocean Economy highlights that the ocean is itself a powerful tool that can be used to fight climate change on a global level.
— — —

At Future of Fish, we’re thinking about how to ensure that climate issues are a key consideration in all our projects. We already offset the carbon emissions from flying to our project sites, and we’re committed to incorporating additional climate thinking into all our work. We look forward to sharing more on this topic soon.