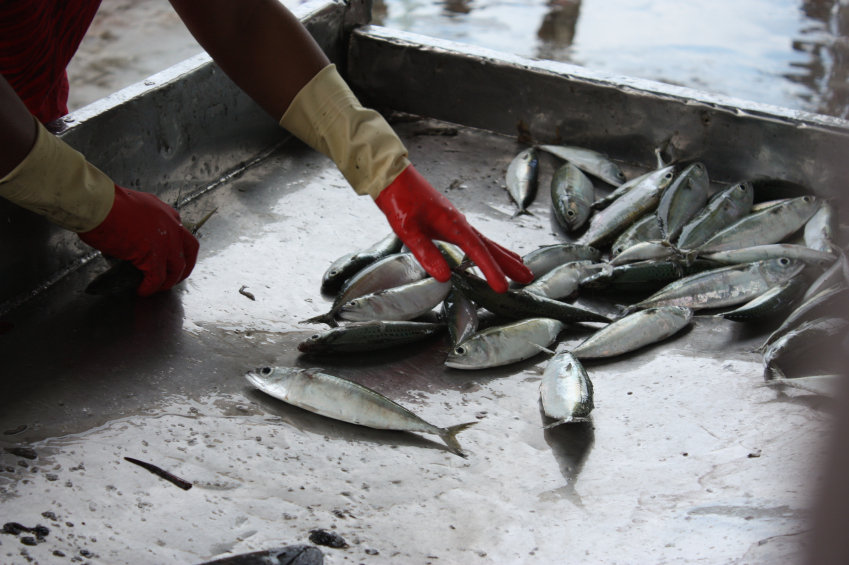 “Try not to determine your self-worth by the outcome or success you have in reaching your goals. Instead, measure the success of your life by how well your actions reflect the intentions that are formed by your core values.”

Three years ago, I began working on solving a problem that is as complex as they come: saving the fish. If you’re not familiar with the problem of global overfishing, the stats are stark: 85 percent of the world’s fisheries are either fished at their limits, or overexploited. At this rate, by 2050, we risk global collapse of the entire commercial fishing industry. That’s bad news for the 200 million people who earn their livelihood from fisheries, even worse news for the more than 1 billion people on the planet who depend on fish as their primary protein.

I struggle daily with the tension Moffit articulates. This problem is so very much bigger than one person. I also work indirectly: My business incubator, Future of Fish, helps develop entrepreneurs who execute their own ideas for what will change the system that produces overfishing. So, how do I define a vision of success, given all the variables beyond my own work? Given that the real impact of Future of Fish is five, perhaps even ten years down the road, how do I choose which short-term goals to pursue? How do I sustain the energy necessary for a journey whose destination is as uncertain as a mirage shimmering on the horizon?

This dilemma is, of course, common for anyone whose work is the stuff of lifetimes, not of quarterly pie charts. It feels nothing like my previous career as a journalist, in which success was defined by the concrete and near-timeline delineated process of writing an article, producing a publication, or researching a book. Now, every day I face situations that are new and uncharted, not only in my experience, but (that I’m aware of) in the social entrepreneurship space. Future of Fish mapped a complex problem, developed a theory of change that the business sector of this problem needed an innovation jumpstart, and is now incubating 8 new companies or joint ventures that target specific stuck points we identified to driving change that will save the fish. It’s a bit mad, really. It also calls for a different kind of leadership than I’ve ever practiced before.

I’m finding the only way to forge a path (and keep my sanity intact) is to hold the goals more loosely and the values more tightly. In other words, I try to worry more about who I am being, than what I am doing. I have a picture of what I think the type of leader I want to be looks like, the kinds of things she enables, the way it feels to be around her. And I try to generate that in every interaction. If I honestly don’t know what comes next, taking a breath and touching back to that vision almost always helps me figure it out.

This practice is much harder than any to-do list I’ve ever tackled. It also feels a lot more rewarding.

Future of Fish represents the first time I’ve attempted to have the patience to work on something for which succes is measured in years, not days. It’s the first time I’ve taken on a problem that is too far gone to “fix” the way I would like it to look. (We will lose some fish species entirely by 2050. We will be lucky if we don’t lose several kinds of sharks.) So what’s the point, really, if I can’t “win”?

We human beings are messing things up big time here. Have been for eons. We are inventing problems that are so complex and entrenched that we are stymied to develop the new ways of collaborating and innovating that can match them. But I believe that in our efforts to stand unyielding in the face of that truth, to hold it without our knees buckling and collapsing, without being attached to how the fight will turn out, we invent new ways of being. We invent new ways of understanding our interdependence and connectedness. Human consciousness evolves.

And, yeah, maybe that sounds like a bit of woo-woo California nonsense. Except that I can see bits of it happening. I’ve seen processors and fishers in the same room, who should be sworn enemies, talk about feeling like brothers. Two people who worked on this project during the research phase changed careers as a result. I see the light bulbs inside people’s heads flick on when I tell them that 80 percent of U.S. fish is imported, which means people in Indonesia can’t afford to buy the most accessible protein source they have. If I am creating a space, or generating the activities that cultivate that connectedness, that is a win, no matter if the specifics of my project fail.

Or at least that is what I hold on to when I get up every morning and look at a to-do list that is longer than my arm, and all the ways I would have measured my own performance in the past no longer apply.

I give similar advice to those who ask: What fish should I eat? It’s not a simple question. You can download a wallet guide or smart phone app to help you pick, or come up with a few rules about fish to avoid. All of those are useful strategies, to a degree. But ultimately, the challenge is more nuanced than a clear choice. Between 30 and 70 percent of all fish is mislabeled, which means that often you will not have the information to make a right choice. Should you just avoid fish altogether? Stop eating it because it’s too hard to succeed?

Well, I’d argue that you accomplish more by engaging than by being right. Ask, relentlessly, consistently where your fish came from. Pressure your fishmonger, the waiter, the chef, and the supermarket, to verify origin. The work that needs doing now is not the quick fix of ticking boxes. It is the reinvention of supply chains and business practices. But every time you ask that simple question—where is this fish from?—you drive the system in the right direction. You acknowledge the interconnectedness that ties your fate to the fate of fish. You live your intention.