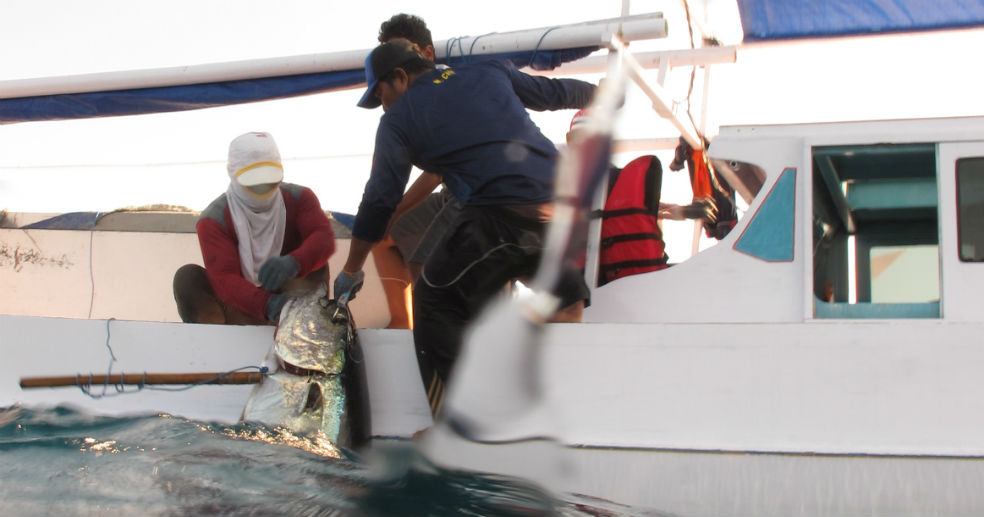 "Don't you dare fall off this boat." That was the constant thought that Future of Fish team members had in the darkness. They were in the middle of the Flores Sea at 11 pm with fishers from Labuhan Lombok, Indonesia, in a tiny wooden fishing vessel.

The team was getting to know the yellowfin tuna fishing community there as part of the mFish initiative, a public-private partnership launched in 2014 by the United States Department of State. The goals: make fishing more sustainable and improve fisher livelihoods by developing practical solutions for fisheries using commercially viable mobile technology.

Here are the Future of Fish team's initial top 10 take-aways from this overseas adventure:

New names. "Marah!" The immigration officer shouted Research Co-Director Marah Hardt's first name as he stamped her passport at one in the morning. His expression changed suddenly, becoming unfriendly. "Marah! Very, very angry." Turns out that "marah" is the word for angry in Bahasa, the official language of Indonesia. Those who know her find this funny given her friendly, good-natured disposition. Pod Director Keith Flett was a close second: His first name is synonymous with a carwash soap.

Clutch local partners. Local MDPI Coordinator Nuriasih Nababan, Communication Officer Indah Rufiati, Fisheries Associate Nandana Godjali, and Sustainable Fisheries Coordinator Wildan Ramadhan went above and beyond to establish a sense of openness and trust with the fishers. Having such knowledgeable partners is key for deeply connecting with a community. It's no surprise that this year MDPI was a Seafood Champion Award finalist.

Gift giving. Exchanging small gifts known as oleh oleh such as cookies or a flashlight is the cultural norm. Anthropologist Charley Scull from Practica Group, who joined Future of Fish on the trip, explained that oleh oleh signifies that you're fostering a friendly, long-term relationship. Participating in the gift exchange was a way to reinforce the trusted relationship MDPI has built with the fishers and local community.

Lifejacket-FADs. Lifejackets have a different life inLabuhan Lombok. Turns out they make great parts for fish aggregating devices or FADs.

Specks in the ocean. Fishers head out two types of wood vessels, mandars and penongkols, alone in the middle of the Pacific Ocean with nothing around. When darkness descends, the isolation feels complete.

Keeping in touch. On the boats, fishers are always in physical contact. Part of that is because of their brotherhood and familial bonding, but it's also likely for safety. In an environment that is pitch black for hours, staying in touch makes it harder to go overboard without anyone noticing.

Fish organs. Tuna stomachs, livers, and gonads have great significance for fishers, who say these organs provide health and virility benefits. Offering the organs as a gift was so important that, in spite of rough seas, the captain dispatched a crew member in a small canoe called a sampan to deliver them to the team of Westerners.

Drinking hot coffee from a plastic bag. One morning, Keith desperately needed coffee. The local "to-go" option for liquids is actually a plastic bag with a straw in it. He's still not sure how the boiling liquid didn't melt the bag.

Reading the sky. Fishers rely on a system of traditional knowledge to decide when to go to sea: Can the stars be seen? Can a light on a distant point on Bali be seen? If neither is visible, the fishers stay put. The system is not infallible, though. Many fishers have stories of heading out and getting blown far from home.

The long haul. Extraordinary effort and resources go into catching one yellowfin tuna responsibly. Future of Fish team members got to see it: the prep work, the gas, the ice, the 14-hour ride out to the FAD, then days of fishing followed by two hours hauling in one 70-kilogram tuna by hand. These animals do not want to come out of the water. Knowing how much energy went into catching one fish inspired a new appreciation and deeper respect for the food on our plates.

A full report from Future of Fish about the pilot that includes recommendations for scaling mobile technology uptake in emerging markets is coming soon. Solving complex environmental problems isn't easy, but it's encouraging to know that we're not alone in the boat.