Historias de pesca: René Jara (Versión en Español más abajo) René Jara, also known as "Patolín", was born in Duao, a fishing cove in the Maule region of Chile. He began fishing when he was 15, and now — at 28 — he’s an expert in the art, catching hake, squid, crab, and elephant fish among other species. For René, fishing runs in the family: he credits his father for teaching him everything he knows. 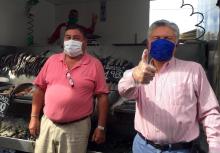 Luis Solís, born and raised in the commune of Renca, is a tireless worker and champion for his community, dedicated to working with small scale producers and businesses to improve food supply chains and access to nutritious food for all Chileans. Over the course of his career in both the private and public sectors, he observed a lack of connection and organization between workers causing inefficiencies in the food supply system, as well as a growing concern over the declining nutrition, health, and wellbeing of his fellow Chileans. Luis’s passion for finding solutions to these two issues drive the work he does today.